Human resource and training professionals seem to jump from fad to fad and are often guilty of burning through large sums of money reinventing the wheel with custom content. “It’s different here,” they truly believe. “We have a unique culture. We’re special!”

Yet, if there was ever a standard for new manager training it has to be the theory of situational leadership.

What Is Situational Leadership® Theory?

And the situation means whether your direct report (i.e., team member) is a competent and committed superstar, or on the other end of the scale, an incompetent slacker.

For example, you’ve got a young newbie on your team with little experience. You would want to be very “directive”–show her how to do it, tell her to do it, make sure it’s done right. But for another team member who has ten more years of experience than you do, and has always performed well, you’d just delegate and get out of the way. They don’t need you looking over their shoulder and being all micro-managey. (No, that’s not a real word. But it’s funny.)

“So What? What’s So Great About That?”

So you’re not impressed with this model, huh?

That’s because today, it seems like common sense. But before there was the idea of situational leadership most people assumed there was One Right Way to Lead. You could argue about what the right way was—Autocratic, Laissez-Faire, Servant, Transformational—but it was just assumed you had a model and led everyone the same way.

But in the 1960s leadership wonks started coming up with a variety of “contingency theories.” Meaning the best leadership style would be contingent on things like organizational integrity, environmental factors, the type of tasks that needed to be completed, etc.

And in the sixties, there was a lot of research and competing theories even within the broad idea of contingent-leadership. So they put all the professors on an island and each week they voted the most annoying leadership geek off the island until there was a single winner.

OK, that never happened. I was just making sure you didn’t fall asleep. What really happened was…

Paul Hersey and Ken Blanchard: The Lennon and McCartney of Leadership

In the year that the Beatles would release Abbey Road, Dr. Paul Hersey and Dr. Ken Blanchard released Management of Organizational Behavior, a textbook that would turn them into rockstars of the leadership world. It’s a textbook that would be used in business courses for over forty years.

(What, they don’t look like rock stars to you?)

It was this textbook that laid out the original version of the model, and Hersey and Blanchard become partners in a management consulting and training company called The Center for Leadership Studies.

But remember what eventually happened to the Beatles?

Yep, the rockstars of leadership split up, too.

To purists, there are important differences between the two models. For most HR professionals and managers, not so much.

You can see some of the differences between the two versions in the visual model. Situational Leadership® offered by The Center for Leadership Studies looks like this: 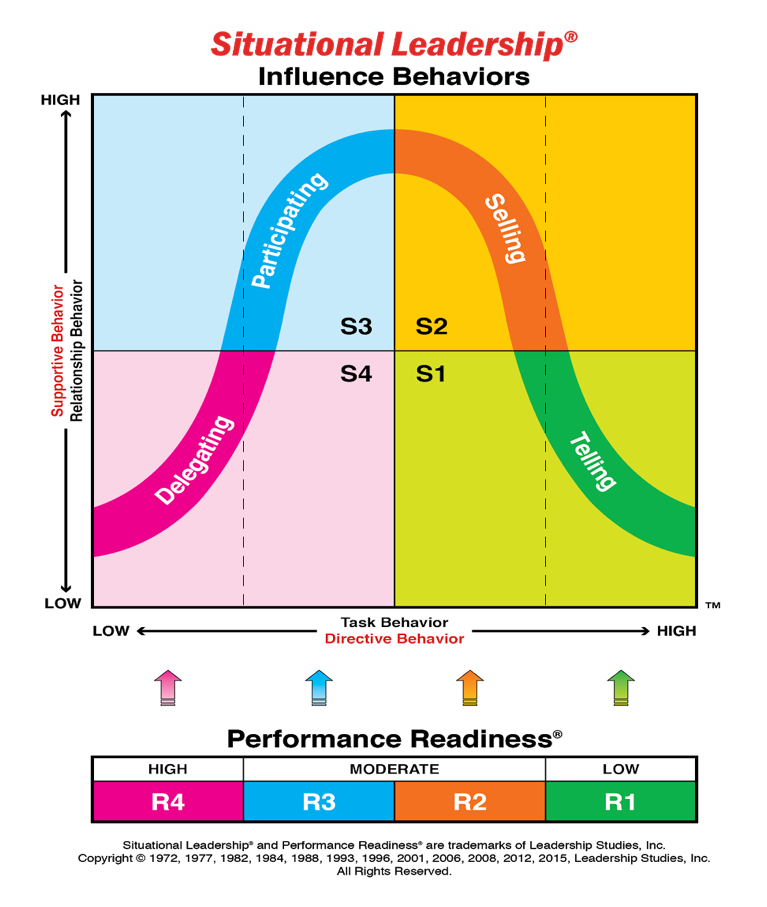 The SLII® model offered by The Ken Blanchard Companies looks like this: 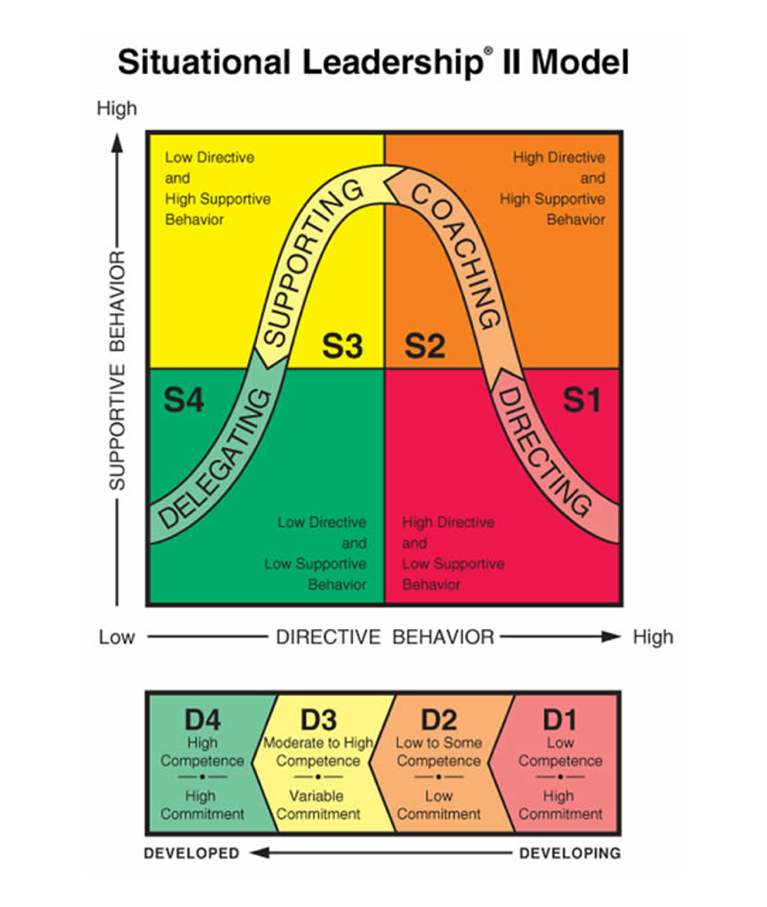 To further explain situational leadership theory, we’ll stick with the Blanchard SLII® framework, and reference the image directly above.

To understand and define the “performance readiness” of the follower, you determine how competent they are and how committed they are. You can see in the image above that followers move from D1 to D4 classifications as they become fully developed.

The SLII® model describes four basic levels of leadership based on a combination of directing and supporting:

You then match your leadership approach to their stage of development:

A critical aspect of situational leadership is that you don’t make a single judgment about each employee. “Kevin is such a D1! I’ve got to direct everything…”

Rather it’s task-specific. A seasoned sales professional might be a D4 when it comes to sales calls, but a D1 when it comes to using the new CRM software system. As the leader, you’d delegate sales related items, but be highly directive when it comes to call planning, digital notes, and reporting.

Visit The Center for Leadership Studies to learn more about Situational Leadership®.