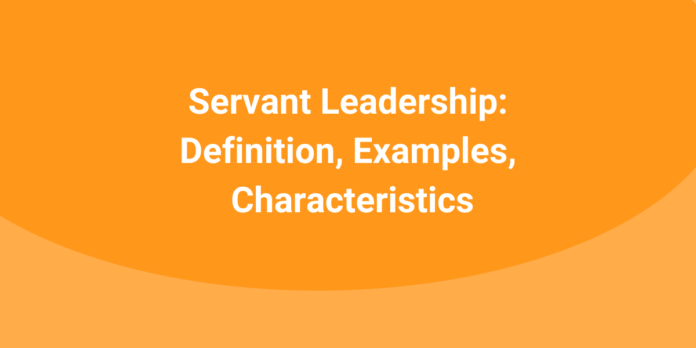 Despite being five decades old, “servant leadership” is a philosophy that is still earning quite a bit of buzz—because it’s so effective. Research has shown that servant-led companies are more likely to outperform competitors, retain employees, and develop future leaders than companies that operate out of more traditional “command-and-control” leadership styles.

Robert K. Greenleaf first introduced the servant leadership philosophy in his seminal essay The Servant as Leader in 1970, which quickly gained a foothold with business and leadership audiences across the globe.

The idea of servant leadership dawned on Greenleaf while reading Herman Hesse’s novel Journey to the East. The story centers on a group of men journeying on a pilgrimage together. One of the main characters in the saga is a servant named Leo. Leo accompanies the group doing menial tasks but helps keep morale high throughout—until he disappears. Without Leo, the group ultimately falls apart and abandons their pilgrimage. However, several years later, Leo reappears—and the narrator makes a stunning discovery. Leo, despite his servant’s attitude, is actually the noble leader of the organization that sponsored the pilgrimage in the first place. Despite being a fictional character, Leo is the original servant leader.

The publication of The Servant as Leader started the modern servant leadership movement which quickly made its way into classrooms and boardrooms around the world. Greenleaf would go on to found The Greenleaf Center for Servant Leadership—a nonprofit dedicated to advancing the awareness, understanding, and practice of servant leadership—before his death in 1990.

Since, we’ve identified the defining characteristics of servant leadership in countless leaders throughout history—Jesus Christ, Mahatma Gandhi, Mother Teresa, Nelson Mandela, and Martin Luther King Jr. being some of the most famous and oft-cited. But what does it mean to be a servant leader today, and what does servant leadership look like in practice?

Servant leaders, as the term suggests, are “servants” first and leaders second. Their desire to serve is natural and innate; while stepping into a leadership role is a conscious choice. At its core, being a servant means taking the responsibility of meeting others’ needs upon yourself. In a business setting, that means making an individual’s growth and development—personally and professionally—first priority.

Servant leaders, then, empower and serve their followers to achieve a shared vision for the future—effectively “leading from behind.”

Nelson Mandela illustrated this concept in his autobiography, Long Walk to Freedom: “ A leader…is like a shepherd. He stays behind the flock, letting the most nimble go out ahead, whereupon the others follow, not realizing that all along they are being directed from behind.”

“The upside-down pyramid” is another way experts describe servant leadership. In a traditional hierarchy, the CEO and upper levels of management are at the top of the pyramid, and those underneath—including middle management and frontline employees—are responsible for catering to their needs. Servant leadership flips this model on its head, putting employees and customers at the top.

“You’ve got to turn that pyramid upside down, so now you work for your people, who eventually work for your customers,” said Dr. Blanchard, author of Servant Leadership in Action, in a podcast interview. “Once the vision, and direction, and goals are clear, the job of the leader is to help people live according to the vision of values and goals and be successful. Now you're working for them. You're the head cheerleader.”

Pat Falotico, CEO of the Robert K. Greenleaf Center for Servant Leadership and former IBM executive leader, says that all servant leaders have a natural desire to serve, hold themselves accountable for the growth of others, and operate out of a drive to create a better world.

What’s more, Greenleaf writes in The Servant as Leader that the best way to “test” a servant leader is asking if the people they serve, “while being served, become healthier, wiser, freer, more autonomous, more likely themselves to become servants?”

Greenleaf also offers a few characteristics that exemplify servant leaders in his essay:

You don’t have to look very far to find examples of servant leadership throughout history—Jesus Christ, Mahatma Gandhi, Abraham Lincoln, Nelson Mandela, Mother Teresa, and Martin Luther King Jr. being some of the most well-known.

A few modern examples of servant business leaders include:

The outcomes of a servant-led organization will vary, but positive results of servant leadership can include:

But, like every management and leadership philosophy, servant leadership has downsides, including:

When it comes to developing servant leaders, there are many practical skills that organizations can provide leadership training on. These include:

You can learn more about the foundational servant leadership skills on the mobile-first LEADx platform, the first to combine behavioral science, artificial intelligence, and expert insights to dramatically improve leadership behaviors, employee engagement, and productivity. In addition to video courses, summaries of best-selling leadership books, webinars, and podcast episodes, LEADx also comes with DISC and Growth Mindset personality quizzes and micro-coaching plans on topics like developing a growth mindset and adaptability.

If you’re interested in a complimentary demo of the LEADx system to see if it fits your online leadership training needs, just request a demo at https://leadx.org/demo-request.