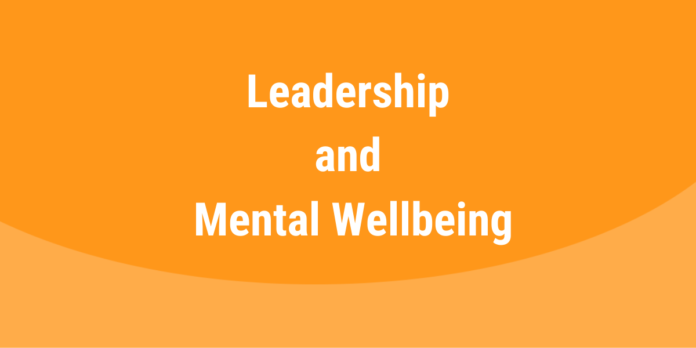 There’s a popular and romanticized image of a strong leader. It’s someone who exudes wisdom, courage, and confidence—someone who always knows what to do and who stays cool under pressure. The reality of course is very different.

The very nature of leadership brings the pressure from never-ending efforts to balance competing interests, hard decisions with high risks, and most importantly being emotionally available to everyone else on your team. Over the last 30 years, I’ve known countless leaders—in business, non-profits, the military—who self-medicate with food, alcohol, gambling, and extra-marital affairs. I’ve known others who burned out, had breakdowns, and even died by suicide.

Thankfully, it seems like more and more people are comfortable talking about mental health and getting help. But there are still too many who continue to bottle up and internalize their day-to-day stressors in an effort to maintain an unrealistic and unhealthy stereotype of strength. Why?

Jack Curtis, a recently retired Naval Aviator and former commanding officer, believes the answer is as simple as it is tragic: pride.

I interviewed Curtis in the past when he published what I believe to be the greatest leadership article I've ever read. I recently had a chance to chat with him again and to discuss his most recent article, We Need to Talk. It’s a raw and transparent look at his own struggles with stress and expectation management as an executive-level leader in the US Navy. I encourage you to click and read it in full, then return here for our discussion.

Kevin Kruse: What inspired you to write this article, and why now?

Jack Curtis: I’ve tried several times to write this piece, but I could never find the right way to frame the problem without sounding complaintive, or worse, ungrateful for the privilege I had to lead at a high level. But, as I got closer and closer to retirement and prepared to hand over command to my relief, I realized it was possible to be grateful and honest at the same time. They weren’t at odds with one another. Ultimately I decided it would be selfish to not open up and share some of what I experienced.

Kruse: What were some of those experiences, and how would you characterize them?

Curtis: I should start by pointing out that military command and civilian corporate leadership, though they possess many similarities, remain very different in some key areas. One of these differences is the level of awareness and accountability a military commander has for the things that occur in the personal lives of their subordinates. In many cases, a branch manager of a bank may never learn that one of her tellers got cited with a DUI, or that there are matters of alcohol or substance abuse in the home. These issues are squarely in the purview of a military commander because they directly affect personnel and mission readiness. So, many of the issues I address in the article are so-called “people” problems: family dysfunction, alcohol abuse, financial strife, depression, and sadly, suicide. But, laid on top of these problems was my “day job,” flying high-performance aircraft on and off of aircraft carriers, and preparing a stable of young aviators for combat.

Kruse: When did you begin to realize the toll the stress of the job was having on you?

Curtis: The short answer: too late. There was a weeklong stretch where it seemed like the world was falling down in big chunks. The knocks on my office door asking for advice or help continued at a dizzying pace, and they were all dealing with some very heavy, very dark issues. The whole time I kept trying to put on a confident mask, and just get one problem solved so I could move onto the next. But with each subsequent knock on the office door, and with each subsequent “do you have a second?” I could feel a rage stirring inside: couldn’t I just get five minutes to myself to get some work done. I was pushing down a lot of frustration and stress because I didn’t want to let anyone else down. I didn’t want to be the guy who couldn’t solve their problem. Then I started to develop some tightness and dull aches in my chest. That caught my attention.

Kruse: So, literally a physical manifestation from your experience of stress?

Curtis: Yes, after a full workup that’s what a cardiologist determined, but by this point I’d pulled myself off the flight schedule for a week or two, and was pretty spooked. And I think the important thing to point out here is it didn’t have to get to this point, but I let it.

Kruse: When we spoke earlier you said you thought pride is what keeps more senior leaders from speaking up and confronting these issues. Why do you think that is?

Curtis: I think it’s different for each person, but for me, I think it stemmed from the fact that up until this point, none of the jobs I’d done to get to where I was had really been that hard. Of course, there were tough days along the way, but there was always someone else to shoulder the heaviest burdens. There was always the commanding officer – he’d always know what to. But now I was that guy, and I felt like I had a duty to have all the answers – to know what to do. I was asking so much of my team in preparation for, and then on, a seven-month deployment that I couldn’t fathom the thought of them seeing me take a knee – even if for just a few minutes.

Kruse: What are some steps you think you could have taken along the way?

Curtis: For starters, I should have been more comfortable or willing to give myself a break, and I don’t mean time off, though that might have helped. What I mean is, I should have allowed myself a few “I don’t knows,” or even a few minutes of time for myself with the office door closed. Either one of these simple steps would’ve gone a long way toward creating the freedom and space to think, and the time to be “off.” Instead, I was trying to be “on” for everyone all the time, and not in some performative sense, but in a qualitative sense. Finally, I should have been opening up to some confidants about the stress, but I found excuses not to. I didn’t want to bring it all home and burden my wife with it, and I didn’t want to burden my peers with my concerns when they had mountains of their own to deal with. But, in both cases, I wasn’t giving my support network a chance to function.