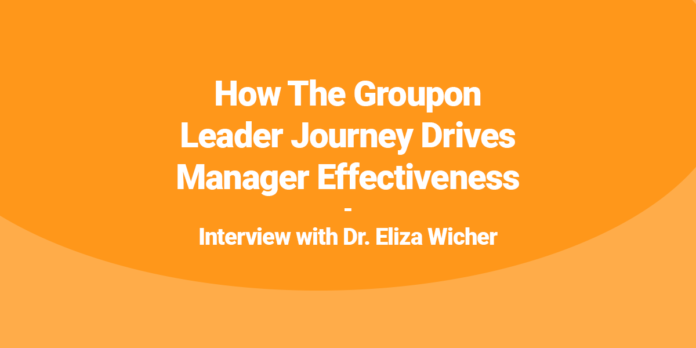 Is there such a thing as a perfect leadership development program?

I’m in the constant pursuit of excellence in manager training and leadership development. Each week I have the opportunity to meet with CHROs and heads of leadership development to review competencies and curricula and the cadence of delivery. What I’ve learned over the years is that no two programs look alike due to the inevitable factors of budget, C-level interest, and company priorities.

And yet, while attending the 20th CLO Exchange event earlier this year I watched a case study of how Groupon develops its leaders, and it was the most perfect model I’ve yet seen.

Groupon, founded in 2008, is an experiences marketplace that works with local businesses all around the world. Headquartered in Chicago, Groupon has thousands of employees and hundreds of people-managers who drive productivity and engagement.

After the event, I followed up with Head of Global Talent Development, Dr. Eliza Wicher, to get more details on Groupon’s talent development techniques. This interview has been edited for clarity and space.

Kevin Kruse: Why does Groupon put such an emphasis on leadership? Many companies don’t.

Eliza Wicher: We do a lot of promoting from within, and as a result we have a number of first-time managers. Recognizing this, we know that if we can get them really good at managing their teams, that's going to lead to high engagement and high performance.

Kruse: At the 30,000 feet view, you don’t just focus on a training program, you have a four-step model for building great managers. Describe it…

Wicher: The first piece is to just have clear expectations. A lot of people intuitively know what it means to manage a team well. But for many folks, either they don't know the full picture or maybe they've heard conflicting things. So we begin with explicit expectations that we call the Groupon Manager Expectations. For example, we expect our managers to “Help your team get things done by empowering appropriate decisions.”

The second component is feedback and metrics. We included in our employee survey a section specifically on those manager expectations. So managers are now getting that direct feedback from their team of how they're doing at meeting each of those expectations.

The third piece is the capability building, the training piece. We call it the Groupon Leader Journey—different programs and tools that we've put out there for managers.

The final piece is accountability. That's a thing that a lot of times we know we send people to training, but it's unclear, are they actually doing the things we want them to do back on the job? So we wove into our performance review process a people management assessment that is factored into their overall performance evaluation.

Kruse: Many in HR really get fired up about the difference between competencies and capabilities and just skills. Regarding your list of manager expectations, how do you think of those? Are they competencies?

Wicher: We call them leader habits. I'm honestly of mixed minds on the topic of competencies. I think a lot of times, these broad leadership competencies, they're great in terms of giving an overall direction of what you want people to do. But when it comes down to day to day, how does that translate to me in my job, it can get a little fuzzy for a lot of people. For each of our leader habits, we get even more granular and describe the manager expectation attached to it. For example, for “stay humble” as a Groupon manager you should be doing things like, take advantage of the training that's available to you and not just make sure that your team is doing whatever training they need to do.

Kruse: Your second step is feedback. How often are you doing those surveys?

Wicher: We do our deep dive survey twice a year, which we call “long pulse.” That's where our managers are getting the manager expectation score. We do one additional manager expectation score survey at the end of the year, to give the managers a third data point as they're writing that year-end review. So in total, it's three times a year that they're getting that feedback, and we also have a 360 that managers can launch for themselves at any time.

Kruse: The third part of your framework is to develop the capability. What does that look like?

Wicher: We recently rolled out the Groupon Leader Journey, so each manager has a clear path. What do I take first, second, third, etc.?

It begins with quick and easy e-learning for anyone who's either just been promoted or just come into Groupon as a manager. That's regardless of prior experience. This could be a senior executive, but if they're new to Groupon, we're asking them to do that e-learning, just because it gets everybody on the same page around the leader habits and manager expectations.

Then, the people who we promote into manager roles for the first time, we have a great program for them called Fast Start 90, or FS90. It's a 90-day blended learning program, with three live sessions, where they are covering content that's very closely linked to those manager expectations. We include a Hogan self-assessment so they can gain some self-awareness. There are a lot of things like toolkits and checklists and very practical things that they can use on the job.

For the director or senior director level, we have been using situational leadership and we're in the process of creating a program that specifically deals with some tricky things at this transition point. It has to do with navigating the matrix and influencing without authority, those types of things.

Kruse: What does the future hold? How might you enhance the great programs that are already in place?

Wicher: COVID-19 has been a good forced experiment for us to really push the envelope on virtual. As a global company, we're pretty dispersed. So I think this has really raised our game with the virtual piece and forced us to learn fast about what works and doesn't work. And I've really been surprised by how engaging it's been even for our more senior folks. That was something that I really worried about, is, will some of our more senior leaders be engaged in virtual formats? Surprisingly, it's worked really, really well. So I imagine that even when we're back to people being able to travel, we will still probably leverage virtual way more than we have in the past.

Kruse: Final question. Any advice for someone who has to build a leadership development program from scratch, or who wants to redesign the program they have?

Wicher: I would say above everything else, just keep it really simple and keep it really focused. You're not going to be able to do everything. So really working with the leaders in your company, try to pinpoint what are the one or two things that would make the biggest impact and just really double down. 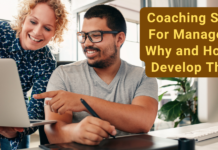