How can you generate fierce loyalty on your team? How can you lead and engage millennials?

Those are the types of questions Dov Baron makes his living answering. Founder of Full Monty Leadership, Dov travels around the world as an executive coach and keynote speaker, and has been named as a top 100 leadership speaker by Inc. Magazine. He's also the host of the Leadership and Loyalty podcast and the author of the bestselling book Fiercely Loyal.

I recently interviewed Dov to get his advice on inspiring loyalty through leadership. (The transcript below has been edited lightly for space and clarity).

Kevin Kruse: What is a common leadership mistake you see throughout your travels?

Dov Baron: Very often, I find that leaders are looking at who they think they should be as opposed to who they are. They think that leadership is a thing, meaning okay, if I'm going to be a leader, I have to wear this suit, this tie, this outfit, and along with that, this attitude and all those things that are not statements about who they are. The biggest mistake in leading is to try to be something that you're not, because that doesn't endear people to you. It actually pushes them away.

People ask me questions like how to be more authentic. Right there, we have the problem. Authenticity is you. How do you be more of you? You stop trying to be who you're not. There's the answer.

Kruse: You say that keeping top millennial talent is the most important thing leaders can do. Why should retention and loyalty be a top priority?

Baron: Engagement is incredibly poor. Here's the simplicity of it. If you don't keep your people, there's no ROI. When I entered the workforce, I'm in my late 50's, I was asked the question: What do you want to do for your career? It was a 20 to 40 year question. Many people in top leadership positions are around my age. They're 50+, and they were asked the same question. The difficulty that they struggle with is these millennials seem very entitled and they disappear.

When you ask millennials what they want to do for the rest of their lives, they don't know. A career to them is four years, not 40. It's ten times less. That's a career, not a job. A job is every 1.2 to 2 years and here's the thing you need to know as a leader: It costs you 1.5 to 2 times the annual salary of every individual to train and develop them. Therefore, if you don't keep them longer than two years, you have no ROI. They are a cost to you. If you don't keep them, if you don't build that loyalty, you are already running at a deficit. Your bottom line is people.

Kruse: So how do you retain millennials if they want multiple careers?

Baron: You want to keep millennials? Don't allow them to get bored.

Millennials love to learn. I learned this totally by experience. Not because I was brilliant, but because I hired a young millennial, when we were very small. He had just graduated with an HR degree; I said, I don't need an HR person. I had advertised for an Administrative Assistant. He said “I have looked at your stuff. I want to work with you.” I'm like “Okay, mate, but we don't have HR.”

I liked his attitude, so I said “I'll tell you what. I'll take you on, but the deal is because we're small, you will have to wear multiple hats.”

I kept him for five years. I kept him by throwing new stuff at him. “Okay, do you know anything about websites?” “No.” I said “Do you want to?” “Yeah.” He went and learned code. He learned how to build my sites. “Do you know anything about video?” “No.” Taught him how to frame. Taught him how to do the imagery, how to make it look right. He went away, studied all the software, came back, did it. He ended up doing all those things for me and a whole bunch more.

“Why do you say that?” he asked. “I love working here.” I said, “It's just because that's the nature of it. It's what's going to happen.” “But,” I said, “Here's what I want you to know. When you're ready to leave, don't sneak away. I want you to come and tell me, because I'm going to be your customer. I'm going to support you, because whatever you open as a business, there's a good chance I trained you in it or I paid for you to learn it.”

When he left us at five years, he opened a company and we were his first customer.

Kruse: Amazing insight you had into that and that prediction.

Baron: This is one of the things I want leaders to grasp from this. We don't live in the same world anymore. When I started out, if you wanted to start a brick and mortar business, you had to have a lot of money, support, and backing. I can start a business today online for ten bucks. That's it. Ten bucks. It's very easy to do, particularly if I'm a pretty resourceful young man or young woman.

This is a time of entrepreneurship and we live in the most entrepreneurial country in the world in the US. Therefore, your employees need to be encouraged into that, so you need to build entrepreneurial processes where they can think like an entrepreneur inside your environment. They will build you a business for you, and that way you're not restricting them. They have autonomy. They have all the things that they want and they add a ton of value to you.

Kruse: You write about a telling a Full Monty story. What does that mean to you?

Baron: Obviously, it's a metaphor. It's very simply, like in the movie Full Monty, you strip everything off and you reveal yourself. In the movie, the guys take everything off because they're competing with strippers who are much younger, much better looking. The only way that they can draw a crowd is by taking everything off, including the things you can't.

That is what leadership has to be today. It has to be that part of you that goes, “I can't say that.” That's the part that has to be revealed. I use the word soul. I've got to tell you. That's a word that scares the s*** out of me to use.

I still choke on the word soul to this day, 30 odd years in, but I know it's the truth of the message that allows people to bond with me, allows them to get what I'm saying. That is what you need to do as a Full Monty leader is reveal the thing you can't. Reveal the thing they, those great authority figures, said you should never talk about.

That's where you're going to endear people truly to you.

Click here to listen to the full interview with Dov Baron.

How Amazon Develops Entrepreneurial Leaders To Grow Their Delivery Network 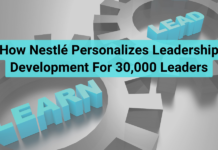